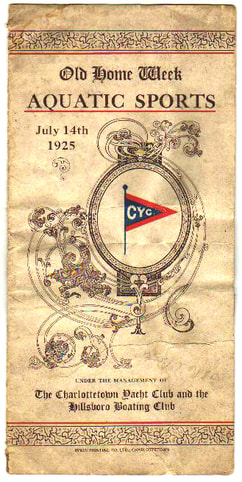 Recreational boating has a very old history in Charlottetown. According to Harry Holman's website, the Hillsboro Boating Club ran the "Regatta" in Charlottetown as early as 1874.

Founded in 1922
The Charlottetown Yacht Club is located on one of the most scenic points of the Charlottetown waterfront, with a panoramic view of the Harbour. The CYC was established to "Promote small boat sailing and motorboating in and about the Charlottetown Harbour, and to provide for anchorage and facilities relative thereof for all Club boats as well as visiting boats and yachts". The origin of the Club is documented in the reproduction of an article from the Halifax Sunday Leader published in June 1923, shown below.

The first CYC clubhouse was built in 1937
On his website, Harry Holman told the story of why and how the first CYC clubhouse was built on the site in 1937. Visit https://sailstrait.wordpress.com/yacht-club-history/ to see the pictures and read the early history. The year 1964 was another milestone when major renovations were made to the wharves and the building was extended.

The current clubhouse was built in 1992
The old clubhouse was torn down in 1992 and replaced with the current, larger building. The new building provided a restaurant, banquet room, change rooms/showers, a boardroom, classrooms for junior sailors and more deck space. In 2022, a major renovation upgraded the washrooms, combined the two front offices into a large retail space (Fred's General Store), converted the boardroom into a lounge (Wayne D. Gray Mariners' Lounge), and revised the tool room/workshop.

Marina Infrastructure
Originally, boats were largely kept on moorings. By 1992, the marina had 32 berths at docks and 25 boats on moorings. In 1993-94, CYC took a giant step forward by building a new clubhouse and marina. In 2000, CYC installed a new state of the art floating breakwater and 80 new marina slips. The docks were renovated in 2002 to increase the number of slips and install new electrical pedestals with meters, dock lighting, cable television and telephone outlet capability. In the 2010s, the 72 chains were replaced, the old wooden junior sailing docks were replaced with EZ Docks, the City installed a pubic kayak EZ Dock, and the marina was dredged.

A tradition of education, racing, and generous hospitality
CYC has held up the long tradition of education, racing, and generous hospitality established by Charlottetown boaters in the 19th century.  Today boaters have access to the marina, moorings with tender service, gas dock, launching slip, a 10,000 lb. crane and mast crane, all serviced by a friendly knowledgeable staff. And of course to the vibrant, friendly social life at the club.

Racing in Charlottetown - More than 140 years of a Summer Regatta
Charlottetown Race Week in its present form dates back to the 1980s but has deep roots in the community. Charlottetown has hosted a Regatta in various forms since the 19th century. On his website, Harry Holman notes that Hillsboro Boating Club operated a popular Regatta at Charlottetown as far back as at least 1874, following the rules of the Royal Halifax Yacht Club. Like today, the 1874 Regatta attracted "fast boats from various towns and settlements on the coast". A grandstand was erected at Connolly's Wharf. During a week of festivities they held a public dance in the Drill Shed, a Grand Ball and a Concert. Over the years commercial fishermen and professionals have competed in various regattas at Charlottetown along with weekend sailors. See CYC Race Week History for information about the history of CYC's modern Race Week.

Junior Sailing Program
The CYC has become a leader in seamanship education. With a strong Junior Sailing Program currently using a Laser, Optimist and 420 fleet, many young people have enjoyed becoming water-wise. Also, the "young at heart" are learning to sail in our adult sailing courses, which are rapidly gaining popularity.

Fred Small -- The CYC's sturdy and reliable workboat turned 40 in 2023
CYC's workboat just prior to 1983 was an aging wooden boat called the Wiz-Bang. In 1983, CYC replaced the Wiz-Bang with a new Rosborough R-18, named "Fred Small" when it was delivered to CYC in 1983, in honour of one of CYC's most respected members. The Fred Small turned 40 years of age in 2023 and is still going strong with a recent 40-horse outboard. The Rosborough company in Mahone Bay began making the RF-18 in 1981, an 18-foot fiberglass workboat model still making waves here and there in North America. Miss Magic, a family-owned 1988 wheelhouse version of the RF-18, provided mark boat service for CYC races in the 2020s.

Fred and his wife Jean were generous members of the Charlottetown Yacht Club for many years. Fred was active in the boating community from the 1930s to his passing in 1989 at age 86. Mac Irwin described Fred as “the strongest man on the waterfront” from rowing and paddling in the 1930s-40s. He and Jean married in 1952 and lived downtown. Fred raced with Mac in the 1950s and became a constant presence on the Charlottetown Yacht Club deck chairs visiting with everyone, including Mac and other key CYC members of the day like Hal Bourke and Plum MacDonald. Fred worked at A. Kennedy & Co. Ship Marine Supplies & Hardware on the corner of Queen and Lower Water Streets. Today’s senior members recall buying rope from Fred in the store which smelled rope and oakum, and Fred teaching them knots and splices on the veranda as youngsters. Fred served as CYC Commodore in 1943-47, Vice Commodore in the 1950s, and was named Honorary Commodore.

The CYC Burgee
One of the earliest activities of the Charlottetown Yacht Club was the identification of a burgee for the club (see images below). In 2020, Harry Holman found that there were several versions of the CYC burgee and no clear evidence that any one design had been formally approved. He and Operations Manager Andrew McFarlane developed the 2020 version in consultation with members. The triangular red and blue flag with the CYC letters in white comes from a long yachting tradition. The triangular flag is unique to yachts and should be flown to show that the owner is aboard or nearby. The colour and design identifies which club the yacht belongs to. Originally these flags were flown from the masthead, but more recent practice it to fly the burgee under the starboard spreaders. If it has no other value it can act as a wind indicator.  Powerboats fly the burgee off a short staff on the bow. Club commodores fly a special flag which has similar design elements but is square with a swallow tail. Burgees should be an essential element for the annual sail-past.

2018 - CYC Awards Night Winners
2020 - Year of the COVID-19 Pandemic and Hurricane Teddy:
The COVID-19 pandemic struck the world in January/February 2019. In March, PEI declared a state of emergency that persisted throughout the boating season. PEI's Public Health Office issued directives and guidelines. Under Commodore Don McGinn's leadership, CYC's Board of Directors, staff and volunteers rose to the occasion. Members had a great boating season within the restrictions needed to keep everyone safe. In late September, Hurricane Teddy arrived as a post-tropical storm to make 2020 an even more memorable year. The threat of the cyclone nipped the season a bit short for many. Club members pulled together to prepare boats and infrastructure.

2022 - CYC100, CYC turned 100 in 2022 and Hurricane Fiona:
In 2022, CYC turned 100. It was a spectacular year for the club.
Article from a June 1923 Halifax Sunday Leader edition documenting the origin of the Charlottetown Yacht Club
Origin: http://sailstrait.wordpress.com/yacht-club-history/ 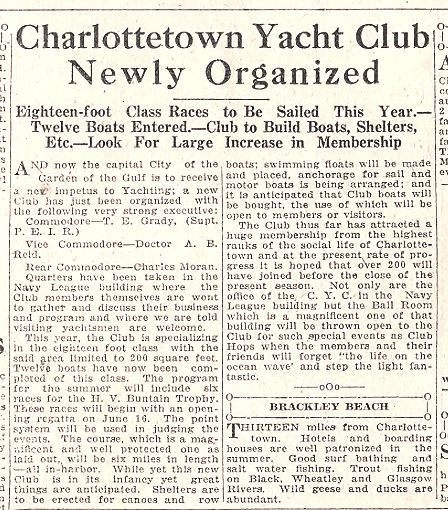 ​In 1991, Rob Hambly wrote the following article, published in the 1997 Race Week Insert to The Guardian, "History of the Charlottetown Yacht Club" (Posted with permission from The Guardian): 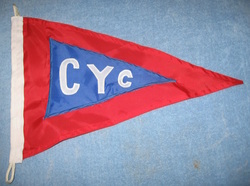 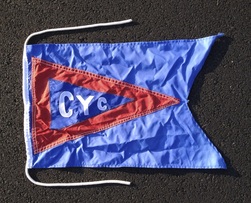 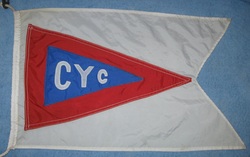 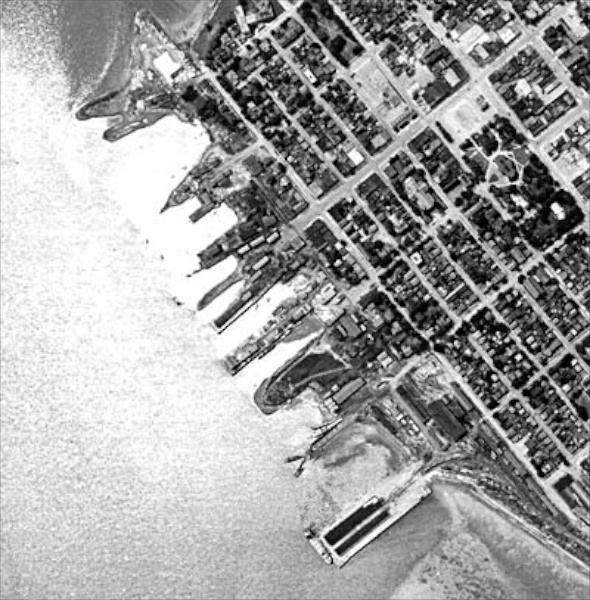